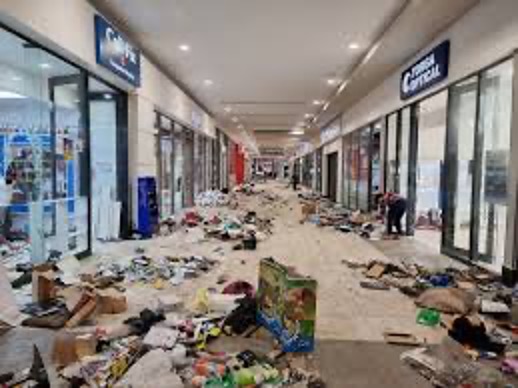 His ministry started in 1991 and he has served in various capacities in churches since then. He is passionate about living a life that will show the value of the God of the Bible and his desire is to contribute to the expansion of the kingdom of Jesus Christ.

Brahm is specifically focused on Biblical Counselling and works to see many people embrace the biblical truths to solve all matters of emotional and spiritual struggles.

13 July 2021 started like no other morning. At 4am, my wife and I sat in our car. Coffee from the flask warmed our hands and hearts as we waited. We were on the lookout for wildlife.

This may sound like the beginning of a holiday to remember in the Kruger National Park, but it is, in fact, a story of the beginning of unexpected chaos as our neighbourhood was threatened by a wild horde.

The previous day, Watercrest Mall, less than four kilometres from our home, was ransacked. Almost all the 116 stores were broken into. What was not removed was destroyed. ATM’s were trashed and cash taken. Fires outside the mall bore evidence of the destructive nature of the mob.

Other malls and storage facilities were left broken, empty and burned. At the time of writing this article, the estimated value of the damage stands at R20billion. According to The Citizen, more than 300 people were killed. (https://www.citizen.co.za/news/south-africa/protests/2578886/death-toll-in-kzn-gauteng-riots-rises-to-over-300/). Other publications claim as low as 45 people paid with their lives.

Antoinette and I volunteered for guard duty. The neighbourhood-watch groups kicked their action into a new gear, social media groups grew in number, and both real and fake threats were shared far and wide. From 4 to 6 in the morning, armed with a flask of hot coffee, we sat in our car at one of the entrances to our area to report on suspicious activities on Zello.

Being part of the security groups on social media provided accurate information. We heard of groups of looters moving along the railway lines to gain access to shopping areas. Many reports of stand-off situations came through. Authorities agree that was it not for the volunteers working closely with security clusters, many more lives would have been lost, and much more damage would have been done.

In the days following the first wave of violence, airlines were overwhelmed by people wanting to evacuate to a safer place. For a few days, COVID-19 was not trending on social media platforms. There was a more imminent risk. Typical of the main stream media, the reality of the situation was hyped up. The damage was devastating, lives were lost, and witnessing the shameful lack of moral fibre in the hordes left one with a feeling of hopelessness for the future of our country.

Family and friends made contact and wanted to know how they can help. “Are you safe? What can we send? Come stay with us in Gauteng.” Who would have thought that those who live in the crime capital of the country would offer us, who live in relative safety, a safe place to stay?

We were overwhelmed by the way people cared. Churches sent money, friends and family sent food parcels through independent operators who followed the roads less travelled to get to KZN. We were fortunate in having enough of a stock of essentials in our home that we never lacked.

New pop-up shops happened in this time. Farmers engaged family and friends to make their goods available in neighbourhoods where shops were closed. Farm fresh and reasonably priced. Shopping patterns changed and a new appreciation for “local is lekker” permeated our broken society.

Stories started filtering through of miracles happening — a food-producing factory not being raided with thousands of looters running past; a piano left untouched in the midst of destruction — to remind us there is beauty left; it has not all been stolen.

I must add at this point that, judged by the reaction of those who were not directly affected by the riots, the perception of our immediate needs were different. We never felt threatened or desperate. Yes, we were concerned. Yes, there were times when my thoughts went to that dark place of “what if”. What if, the rioters attack my home? What if I am unable to protect my wife?

Being “in the know” helped with all of these “what ifs” to a certain extent. Reading the messages on the trusted social media platforms and knowing who the people are in the security teams, helped. It helped me to sift through the empty threats and false claims of doom.

Ultimately, the best of times for our mental and emotional stability was gained by spending time together in prayer. As we sat in our car, on the corner of a dark suburban street, armed with hot coffee, we prayed. We did pray for protection. We did pray for stability. We did pray that the government will make wise decisions. But most of our time was spent praying for our friends and families not affected by the riots. We prayed for salvation for those who do not know Jesus. We prayed for stronger growth in the knowledge and grace of the Lord Jesus by family and friends who do know Him. We found the peace which surpasses human understanding.

The truth shall set you free

Someone once said that your perception is your reality. I have found that this concept affect people’s reaction in a crisis. Take the various strong opinions about COVID-19 as an example. Many very stable and wise people are on opposite sides of the opinion pool regarding the topics: COVID-19 — real or fake, Ivermectin — saviour or not, Vaccine — life-saving or mark of the beast.

The same can be said of the riots. Major crisis or just another day in Africa. We see the difference of opinion and perception in the immediate reaction by people. Some got out of bed and participated in solving problems. Others got out.

I asked a friend (let’s call him John) who has lived for 99 years and through the Second World War what his opinion was regarding the riots. I wanted to know where the riots landed on his trauma-scale. Assuming that his most traumatic day in his life will set the standard at 10, I wanted to know where the riots fitted in. John placed 6th June 1944 on the scale as a 10. He spent D-Day in Normandy on a supply ship, with one of its tasks being to carry bodies back to the United Kingdom. For him, the riots slumped to a 1 or 2 on the trauma-scale.

Next, I gained the perception of another friend (we will call him Jim). Jim never left his house during the riots. He had enough food and all the essential goods like medication and nappies. The riots scored a 10 for Jim. Jim and his family were never in any real danger, and they saw the riots on the 6 o’clock news. But Jim was devastated and seriously considered moving to the island of the long white cloud.

Reality is that those most affected by the riots were the ones who did the rioting and those who organised and instigated the chaos. Fake hope was placed on the false gratification of goods for free. Food and luxury goods won’t last.

Most of the rest of us, including Jim, feared things that never happened, despite what the news claimed to be true.

The truth is that the chaotic, violent and destructive actions of this week in July, surprised all of us.

None of what happened, surprised God. In the moment, when the unexpected happens, we forget who God is. He knows everything all the time. He can organise nature, nations, and individuals to do what He wants to accomplish.

I often encourage people with Romans 8:28:

And we know that for those who love God all things work together for good, for those who are called according to his purpose. — Romans 8:28

This remains true, no matter your perception that forms your experience of reality.

God works. He works all things together. Circumstances, instigators of violence, political parties and their corrupt plans, desperate and hungry shack dwellers, metro police members, neighbourhood watch volunteers, cold fronts and rain, neglected and abandoned railway lines; all used as instruments in God’s all powerful hands to come together at exactly the time, place, and manner that He (God) determined.

While the glow of a burning shopping mall graced the night sky, it was difficult to accept that God worked these riots together for my good. But it was only difficult because I did not remember what God intends for good. Verse 28 and the following verses helps me understand how the riots must be good according to God.

…for those who are called according to his purpose”. God’s purpose is and will always be for me, one of His chosen people, to show His value. I was reminded that the light shines brightest when it is the darkest.

Romans 8:29-30 explains where God fits into the riots (and any other traumatic experience).

You may notice what is NOT in these verses:

God knew who His children were during this time of chaos, we can accept that. But what is difficult to understand is why did God not stop the violence, the looting and the chaos. Why did people have to die?

The answer to these questions is found in the purpose explained in Romans 28.

For those whom he foreknew, he also predestined to be conformed to the image of his Son…

Note that the verse does not say that God’s people (those He foreknew) “He predestined to be safe, happy, and prosperous.”. No, God makes His ultimate intention apparent. The best thing God can do, He does because of and through traumatic experiences, real or imagined. God makes His people more and more like His Son, Jesus.

to be conformed to the image of his Son…

Where to from here?

There may be many more traumatic experiences for you and me. What we make of them, will determine much of how we manage our circumstances in the trauma. More importantly, if you are a Christian, then you have the God-given ability and responsibility to show your hope. Not a self-convincing mantra of “I am strong, I am great, I am good” kind of hope. Real hope is in everlasting life provided by God.

Peter was a rebellious, chaos causing disciple of Jesus. He had to be corrected in thinking and actions more than any of the other early disciples. Peter wrote this about hope:

but in your hearts honor Christ the Lord as holy, always being prepared to make a defence to anyone who asks you for a reason for the hope that is in you; yet do it with gentleness and respect,

So, Christian, when life swings a bat at you, or grabs a TV out of your favourite shopwindow, or burn down shopping malls, make sure you remember what real hope is. Real hope is not that you will survive. Real hope is that on the other side of the trauma, you will be closer to Jesus in character. You will be more like him, as God promises.

4 thoughts on “Rating the Riots”